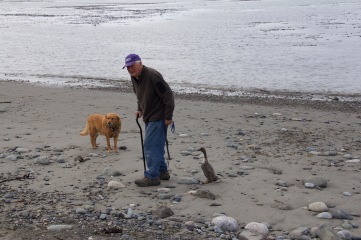 Well, it was not unexpected, this is for sure. Steve Raab, Gus’ son in law contacted me yesterday morning to inform me of Gus’ passing. Shortly after his morning shower, shave and bed change, he simply went to sleep, never to reawaken. He is now with his beloved dog Gabe, Ann’s dog Sophie, and Lil’ Miss Duckles, the Fup Duck. He is rejoining, his Wife, Mother,  Dad and a lifetime of friends and relatives whose funerals he attended. He always said the worst thing about growing old is watching people you love leave this world.

I met Gus shortly after meeting his daughter, Ann Raab, several years ago. He was my friend. We spent countless hours walking the dogs, and the duck, along endless beaches hills and forests, watching glorious Sunrises and Sunsets, mostly during the Summers when I stayed in Washington. His life was amazing, from a different time really. The stories he told, from his memories of long ago, were  exciting to hear; as he relived them to me.  he had difficulty with the “Now”,

It was like he was there yesterday. Sitting in the Subaru, looking out upon the waters of the Sound off Port Townsend, with Sophie and Gabe snooping around the beach, he took me to New Jersey, and we sledded down a steep street where the kids had people move their cars for safety. Gus was the little kid of the gang, and the bigger kids used him at the end of a skating “whip” on frozen ponds; to see how far they could whip him!

Some how his family ended up in Michigan, around Ann Arbor. So he was a practiced sailor, too! Imagine sailing from Lake Michigan to New Jersey? In a 26 ft sailboat with his wife! Well, think about it. Down the Mississippi river, out into the Gulf of Mexico, around Florida, and back up the Eastern Seaboard! Lesser the brave man would at least use a power boat; but not our Gus! Me, I would’ve taken a train! Remember, this was in the forties. …to be continued

From 1923 until 1978, the University of Michigan had only two swim coaches: Matt Mann and Gus Stager, both Hall of Famers.  Matt’s coaching philosophy included the premise “always follow a punker”.  Gus Stager, an outstanding middle distance freestyler under Matt, chose to ignore this advice when he took over the Michigan reigns from the world’s most successful coach in 1953.  All he did to contradict his otherwise eloquent master was win four NCAA team titles, win the 1960 Rome Olympics over a favored Australian team that had totally dominated in 1956, and won the Pan American Games in 1967.  Stager completed his hat trick by coaching the U.S. team to victory in the first World Championships at Belgrade in 1973.  In 25 years as Michigan head coach, Gus’ teams finished first or second in the Big Ten 23 times.  His 1959 college team was perhaps the most overwhelming in NCAA history, out-scoring the 2nd, 3rd and 4th place teams combined.

After prepping at Newark Academy, Gus was a 3-time NCAA finalist as a swimmer.  His coaching career began at Dearborn, Michigan High School where he won a mythical National Championship and the State Crown 3 times in four years before going to Michigan.  His retirement after the 1978 season at Michigan was interrupted by another year of interim coaching in 1981-92.  Stager’s many great swimmers included Olympians Carl Robie, Dave Gillanders, Dick Hanley, Bill Farley, the Wardrop twins and Juan Bello.  NCAA high point winner Tony Tashnik heads an impressive list of national champions including Fritz Myers, Cy Hopkins, Breezy Nelson, Ron Clark, Frank Legacki, and many more.  On the lighter side, Gus the competitor beat all of his swimmers at walking on the bottom of the pool and jousting from over-turned starting blocks.  He is proudest of his part in key rule changes such as the no-touch turn, electronic judging and adding the thousand and the second diving event to the NCAA dual meet program.